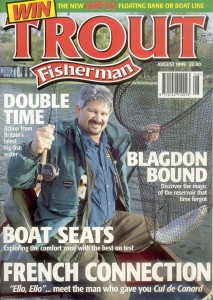 No flytying material has made a greater impact on pur dry-fly fishing than CDC. Chris Dawn fishes with Marc Petitjean,, the Frenchman responsible for spreading the cul de canard gospel across Europe and beyond.

MERDE ».The small swarthy Frenchman spat out the expletive as he threw his rod down in disgust at missing the third offer on the trot to his dry fly. Cul de Canard « king » Marc Petitjean was not finding his introduction to English stillwater flyfishing so easy.

For a man brought cap on the fast, rushing rivers of the Jura, a mountainous region on the French/Swiss border, a five?acre reservoir in the Derbyshire hills would hardly seem much of a challenge. But the resident trout had other ideas and, in thi flat calm that stretched across the clear lake, were playing games with Marcs delicately-tied CDCs.

Marc Petitjean is one of the European anglers credited for the current boom in CDC patterns. Brought cap in central France, Marc started his fishing career by dapping live mayfly patterns under the watchful eye of his grandfather. Hooked on flyfishing, he then attended agricultural college in his teens before going to work as a research scientist in his father’s steel factory.

His skills as designer and engineer later took him to Switzerland, where he spent much rime developing new fly patterns, particularly casing CDC feathers from the preen gland of a duck.

« CDC has been used as a traditional winging material in Europe for more than sixty years, » explained Marc. « Marjan Fratnik came cap with his F Fly in 1982, followed by Gerhard Laible’s loop method about two years later.

« I took it a stage further by casing the feathers to create the bodies as well. I sent examples of the patterns to flyfishers all across Europe. And their reports were so encouraging that I decided to turn professional in 1990. »

Today Marc runs his flytying and tackle business from Fribourg in Switzerland. Besides producing a vast range of CDC flies from delicate mayflies to modular pike and tarpon streamers, his inventive mind has designed mufti?use rods, specialist fishing vests and travel flytying vices, all engineered to a very high level of performance.

But how would the Derbyshire brownies consider such carefully and skillfully tied works of art?

AS Marc pondered over his bursting flybox, an alder fly flew clumsily by before collapsing on the water like a ditched parachutist. It zig?zagged across the surface, attracting the attentions of a small trout that seemed unable to suck it clown.

As well as the usual stockie rainbows and browns, Press Manor Fishery has a cosmopolitan mixture of trout, including a number of baby brooks and tigers, plus some endemic wild brownies. New owner Bernie Maher, a professional cricketer with Derbyshire for 16 years, stocked the exotic juveniles to see if they would grow on in the Victorian?built reservoir, which has been run continuously as a trout fishery since 1923.

Bernie is now in his second season on the water, which he bought from Severn Trent. The two lower reservoirs down the chair are run as coarse fishenies. His application to build a lodge and accomodation on the site were turned down by the country council, so at present he operates the water from a caravan that has seen better days.

« The insect life here is amazing right through the season, » said Bemie. `We’ve got an ideal pH, nineteen feet of water at the dam and rot too much weed. And thanks to the surrounding pasture, insects are always being blown onto the lake. »

Then, as if to prove ex-Londoner Bernie’s claim, hawthorn flies appeared from nowhere to drop onto the water.

I don’t know if the same insect is a big hit in Switzerland, but as the surface swirls grew in size and intensity, Marc reeled in to change to a single black dry Caddis on a greased?up leader.

Local tackle dealer Phil White, of renowned Lathkill Tackle, was first into a fish as his dry Hawthom tempted the first brown trout of the day.

The fish sucked down the fly from the shadows of the bank side alders, but quickly turned and headed out into the lake.

One could have been forgiven for believing that this gold en?hued trout was an original inhabitant of the water, but ex river keeper Phil pointed out the small but slight, indenta tion of the pectoral fins that betrayed its fish farm origins. Nevertheless it was a handsome fish that matched the waterside kingcups and belonged back in the water. More fish were rising in front of Philip, but from then on they either boiled or refused the fly.

Marc’s decision to drop down the fly size and leader strength finally paid off with a fin?perfect rainbow that he insisted on landing by hand. Apparently nets are rot used on Continental catch?and?release waters. With his eye firmly in on the dries, Marc followed up with another rainbow and brown taken on the black CDC caddis from the far bank.

« CDC patterns work wherever you are in the world, » stressed Marc. « You should have seen the Florida guide’s face when I caught five tarpon on one of my saltwater predator patterns. I also rock a 90 centimetre marbled trout in slovenia on one recently. »

I opened my flybox, pulled out a black CDC Bubble Sedge and made my way to the shallower top end of the lake, which so far had been ignored. Fish were still rising in the flat calm as I flicked out the fly on the five weight.

Within seconds a small fish rose and took the fly. I whipped it to the bank where it showed itself to be a tiny tiger trout. A slightly?larger brookie followed, before some heavy rises in the middle demanded more attention. Here a small shoal of rainbows were doing heavy damage to any fly that dropped onto the surface.

There’s nothing more pleasing or pleasurable than taking fish on dry fly. These fish were definitely game and turned down onto the CDC with confidence. No bigger than a pound and a half, they fairly sizzled the five weight line off the river reel.

« Enjoying yourself » asked Bernie as he made his afternoon stroll of the lake. « I always wanted a trout water where you could fish dries and nymphs rather than have to rely on lures. Now I guess rue got one. My dream is to build a house right on the water. »

Meabwguke Narc was si wrapped up in his fishing that we had difficulty persuading him to leave the rising trout and join us.

Even alter two days demonstrating flytying at the nearby Chatsworth Angling Fair, his enthusiasm showed no signs of diminishing.

« I have enjoyed it here very much, » he was keen to tell his host. « Maybe it’s not so scenic as the Alps, but the fishing is nearly as good. We badly need more small stillwaters for trout in France and Switzerland. The numbers of flyfishers is growing every year as they move from bait and spinner to fly. »

Cul de canard patterns had proved deadly on a day when the catch-and?released quarry of a relatively small water were extra fussy. Had Marc anything else to prove with his flies?

« I’ve only just started, » lie replied. « I would like every angler to try my patterns. They’ll work anywhere. That’s a promise. »
WHAT IS CUL DE CANARD?

THE feathers around a duck’s preen gland, which is on the back just forward from the start of the tail, are rich in the natural waterproofing oil which birds use to waterproof their outer feathers. Not onlv are they light and strong, but their fibres are fringed with tinv, twisted barbules wich trap the air, assign to their floating qualities. That is why they are ideal for creating dry flies.

After a fish has been caught on a CDC dry flv, there is no need to oil it afterwards. Just squeeze out the excess moisture or fish slime using a natural material like amadou, and blow it dry.