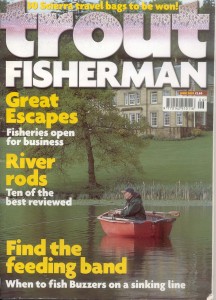 When CDC creator Marc Petitjean wanted to test his dry flies on Rutland’s rainbows, he teamed up with local boat ace Dave Shipman. But the buzzer-feeding fish weren’t conveniently on the top and it required a systematic search of the water to find them.

I’D HEARD a lot about Marc Petitjean and I can remember from reading a Trout Fisherman article, that when it comes to tying and fishing Cul de Canard flies, he’s simply one of the best.

But I was pretty sure from what I’d read, that most of his fishing was on rivers, so I wondered what he would think when he first got a glimpse of the vast expanse of water at Rutland.

When we met at the Lodge, I gave him a quick briefing on the type and colour of flies that had been working during the previous few days. Obviously, Marc had boxes full of his own dry Cul de Canard creations but, after listening to what I’d said, he decided to tie some mini Rutland CDCs there and then. He opted for a peachy colour, because that had been the killing colour during the previous few days, and had soon turned out some very?effective looking little mini lures and nymphs.

It was early May and I’d really hoped that conditions would be spot on for some surface fishing, so that Marc would have a chance to show just how deadly his little dry flies could be.

Because Marc had done very little boat fishing before, let alone on such a large water as Rutland, I’d taken plenty of standard Rutland gear along and we both tackled up in exactly the same way.

Why 1 prefer a long rod

I OPTED for a brace of I I ?foot rods, rather than shorter variants. For me, the choice of this length of rod is all about confidence. But there are other bonuses. The extra length allows you to keep the team of flies that little bit further away from the boat on the retrieve. The extra length allows you to space a team of flies that little bit further apart should you need to and it also allows you to work the flies more effectively on the hang when you’re teasing trout into taking as you prepare to lift off and recast.
Lines for all occasions

I’D MADE sure that we were equipped with plenty of different lines, ranging from floaters to Hi?Ds. Rutland is a big water and conditions can change rapidly and frequently during a day’s fishing. This means that the fish can be feeding at any depth and will feed at a number of different depths during the day, so it’s vital to present the flies at exactly the right one.

It’s not unusual for me to have at least 20 different lines in my bag when I’m fishing Rutland, particularly if it’s in a competition, but for my day out with Marc I just took along three different floaters, three intermediates, a Di 3, Wet Cel 2, Hi D, Rio 6, Di 7 and Di 8!

Finding the depth at which fish are feeding is absolutely crucial. Quite often they’ll be feeding in a band as narrow as two feet and won’t move out of that band to intercept a fly. Not only do you need a line to fish at that depth, you also need one that will allow you to fish your flies in that crucial band for as long as possible.

I’d set up a three fly cast for both of us, consisting of 18?inches of leader to the top dropper, five feet to the middle dropper and then seven feet to the point fly. Leader material was fluorocarbon, which I use in the 61b 81b range. Because it’s fine and so difficult for the fish to see, I see no point in fishing any lighter, and the 81b strength certainly gives you that extra safety margin should you hit into something unexpectedly large!

As we prepared to load up the boat, the conditions were dull and misty, with very little wind. No fish could be seen showing on the surface, so I was glad I’d tackled Marc up with a Wet Cel 2. It would be a good line for the first few drifts until, hopefully we would spot some fish on the surface and be able to switch to floaters.

I wanted to get Marc used to casting what for him must have seemed a very long and heavy outfit. I can appreciate that there’s a big difference between flicking a tiny dry a dozen yards out on a delicate four rated rod and line to wielding a team of three on a sinking line and 11 foot rod!

My aim was to give Marc some practice with the heavier outfit and also some confidence by getting an early fish or two, or at least some solid takes.

BOTH the arms at Rutland hold some really big buzzer beds, which are a natural feeding area for plenty of fish. And, if you have hatching buzzers, I reckoned that we might find some surface feeding fish during the day.

So, first we headed for Berrybutts and then to Gibbet’s Gorse where I thought we might find some stockies, just to get us started. We were looking to fish water between 8-10 feet deep.

I put on a little Orange lure as the point fly, with a couple of nymphs on the droppers, while Marc fished a team of the CDCs that he had tied that morning. We had a few plucks, but no fish. But, at this point, I saw a boat in Manton Bay and an angler who I recognised as a regular, and decided to try a few drifts there, too. There was a light breeze in the Bay, which certainly seemed promising and I soon spotted a few fish in the distance, just breaking the surface.

As we drifted further into the bay, I noticed a big hatch of buzzers? and they were big buzzers, too. Off came our Wet Cel 2s and on went a couple of slime lines, as I reckoned the feeding fish would be just a few feet down. I quickly replaced my flies, with a trio of size 10 buzzers I chose three Black PTNs, but I don’t think choice of the exact fly was that crucial. As long as it was big and black, the fish didn’t seem to care. Marc tied on some of his own CDC Buzzer variants.

WE WERE fishing in about seven feet of water and the fish were clearly in the top three feet of water and it wasn’t long before Marc was into his first Rutland fish a really nice specimen of around 21b 8oz. I wasn’t far behind him and, within a very short time, we’d had several stockies, plus a trio of larger, overwintered fish.

Although the tackle and tactics were totally new to Marc, he was certainly getting the hang of it, casting 20 yards or so and fishing his flies among the fish for as long as possible.

He’d opted for a CDC-style PTN on the point and middle dropper and one of his special dry Cul de Canards on the top dropper, » and I must say he worked his team extremely well, taking four fish in quick succession. All our fish were absolutely full to bursting with buzzers but, on close inspection, none of them were adults. We couldn’t find a single wing bud on any of them, so it was clear that they were on their way up and the fish were gorging on them just a few feet down.

With the fish just a couple of feet below the surface, I was keeping my fingers crossed that the next stage would be a spell of surface feeding as the buzzers hatched, which would mean we could switch to dry Cul de Canards.

However, several other boats, seeing the activity in the area, had followed us into the bay and, just as they did, the sun broke through.

Sadly, it was the kiss of death for any thoughts of catching fish on the surface, as the water was still distinctly cool. It just wasn’t the day for pulling fish up to dry flies.

With the fish dropping deeper, it was time to change tactics gain and follow them down. We both switched to Hi D lines and changed our flies to a Tinsel lure on the point and a brace of Buzzers on the two droppers.
Fight of the day

FOR a time we struggled for takes until everything went solid on my retrieve and I knew I was into a big fish. The fish fought like a tiger and I was beginning to wonder just what I’d hooked when I saw its head break surface. It was a pike and a good one! When I finally netted it I soon realised why it had taken me so long to land it was around the 201b mark and in magnificent condition.

And that was it for our day. Between us we had taken 14 good trout and an unexpected pike. Marc was far from disgraced, with four superbly-conditioned rainbows. Considering this was his first outing on Rutland, with totally alien tackle and tactics, he can be well pleased with his performance.

My only regret is that we’d not delayed our trip by a week. With warmer water and air temperatures, the fish would certainly have been surface feeding and I’m sure Marc would have given me a few fascinating lessons on how to bag up with his deadly little dries!

FRENCHMAN Marc Petitjean is widely acknowledged as the king of Cul de Canard patterns. Brought up on the fast, rushing rivers of the Jura, a mountainous region on the on the French/Swiss border, he has spent years developing new fly patterns, particularly using CDC feathers from the preen gland of a duck.

Today, he runs his flytying and tackle business from Fribourg in Switzerland, producing a vast range of CDC flies from delicate mayflies to modular pike and tarpon streamers.

It was the first time he had fished Rutland, but he can’t wait for another chance to fish the water he describes as one of the most beautiful he has ever seen.

« As soon as I met Dave at the fishing lodge, he opened his fly box and showed me some of his most effective Rutland Nymphs and Buzzers. I took a quick look at them and then tied five or six CDC flies to resemble them as closely as possible.

Dave took one look at them, and was certain I’d catch fish on them. Although I have fished on English reservoirs before, the sheer size of Rutland is awe-inspiring, as is the beautiful scenery.

I must admit I struggled a little with the heavier tackle and lines, I’m more used to weight 4/5 rods and lines. My boat fishing experience is limited mainly to fishing the Mayfly hatch in Ireland, but I appreciate that a boat is essential to cover water as large as Rutland.

I was absolutely delighted with my first fish of the day, not just because I caught it on one of my own CDC patterns, but because it was such a magnificent fish. Rutland rainbows are simply superb fish-bars of silver, with magnificent tails and fins and fight like demons.

The only disappointment of the day was that the fish would not feed on the surface, so I was unable to see how effective my dry CDCs might be on Rutland fish. However, it was a marvellous day out with a great boat partner and some magnificent fish in the net.

I’m definitely hooked on Rutland it’s a water that poses many problems for the angler. You have to think hard to deceive the fish and that’s the sort of fishing I like.