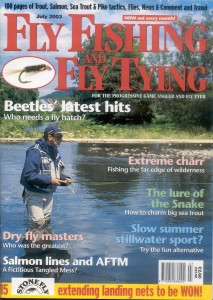 For quite some time fly tyers have been searching for a see through bulldog clip with smooth tapered jaws with which to assist the introduction of material to a dubbing loop or split thread, but typically Petitjean takes this idea much, much further (remember, this is the man who provided an instruction video with his fly fishing vest). The spring-loaded snaps allow dubbing material, CDC, hackles, soft hackles and almost anything else to be combined as a dubbing material before it is picked up in the bulldog clips and offered up to the thread. Simply lie all the materials on the flat top of the snap, place a longish hackle on the top of the pile, grab both ends of the hackle stem and pull clown. As the hackle slides down between the spring loaded jaws it folds and envelopes the material below it the tips of which protrude from the jaws of the clip like a Mohican haircut. These are then grabbed in the bulldog clip, the stem of the feather is snipped away by a sharp pair of scissors, and the whole mixture is ready for introduction to the thread.

Mixing CDC feather colours; combining CDC with a dubbing; instant palmering simple. Even using the snaps and clips to produce a Spider with exactly six soft hackle fibres is a straightforward procedure.

However, to get the maximum enjoyment from this tool you really need to watch Marc demonstrate it but be careful, it’s almost impossible not to buy one after the show.

I watched him use the Magic Tool at the Danish Fly Fair, and the ingenuity of this Swiss struck me hardest when after entralling us with quickfire, but eminently fishable, Magic Tool patterns he picked up the dowel rods. What on earth could they be for?

When he eventually revealed their secret I kicked myself; I instantly recognised their potential in the tying of my Holographic flecked Cased Caddis, a pattern I have been tying (and cursing) for a number of years.

Based on a standard Peeping Caddis, the holographic tinsel was incorporated into the body dubbing after a conversation I had with Oliver Edwards, who said it added attraction to the pattern.

Since then, this pattern bas become the first Cased Caddis pattern 1 tie on my cast, a true favourite.

The Mylar flickers and flashes a full spectrum of colours as it tumbles through the water, and trout seem to find it irresistible; it has accounted for many decent wild fish for me. But have you ever tried snipping off short lengths of Mylar?

Usually about one in six pieces lands in your mat of dubbing, the rest you find scattered around the room for several weeks afterwards. The pieces that do fall in the dubbing lie at all angles, so generally fall out when the dubbing loop is twisted.

The dowel rods change all that. Wrap your Mylar around the dowel, lie the dowel on the snap tool, on top of the dubbing, then slice through the loops of Mylar. Most lengths will lie obligingly across the dubbing mat. It is now a simple matter to fold the dubbing and Mylar together using the snap and applying them to the thread. Now that’s what I call magic!