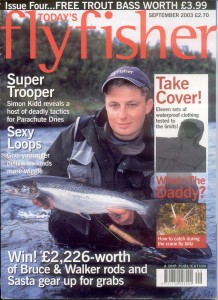 When APGAI instructor Garry Champion got to grips with Marc Petijean’s latest innovation, the CDC Magic Tool, he realised he had stumbled on a cutting edge technique.

I found this system completely by accident at Chatsworth Angling Fair in May. 1 was walking back from the fly tying tent to the instructors’ stand when 1 saw a large gathering in the Nomad tent. Intrigue got the better of me and I popped over for a nosey. Marc Petijean was at the centre of the crowd with The Magic Tool, his latent innovation in tying gadgets. 1 watched in amazement as Marc demonstrated how to use his intricate collection of Perspex clamps and clips. 1 could see that there was a lot more to this ingenious system than met the eye. It had unlimited possibilities.

It was one of those `must have’ moments. 1 weakened and parted with my cash, looking forward to getting the time to have a play with it at home.

The Magic Tool consists of two different sized Perspex bulldog clips, three standing clips of different lengths, and three different diameter dowels the ribbed kind, used for joining wood so the glue doesn’t form air locks. At first, I couldn’t work out what these were for, but as Mark wrapped a spiral of crystal flash down one and then placed it on to a stand it started to make sense.

He ran a surgical blade down one of the grooves and removed the dowel to leave evenly spaced sections of crystal flash ready to be clipped into the tool innovation at its best. The simplicity of the Magic Tool is what I really like. It’s the sort of thing you think you should have thought of yourself. Good effort, Mark.

The moment of truth came back at home when 1 sat at the fly tying bench. I love to work with something new, and after watching Mark making it look so easy I was very inspired. But, as with all skills in our sport, we need to practice so I started of with some basic CDC ideas. The clips are just like a bull dog clip, with the advantage of being able to sec your work before opening the clip. The clips, or tables as Mark calls them, are the really clever part of the system. As you pull the feather stalk into the table, the jaws open and trap all of the filaments, leaving them pointing in one direction, ready for the other table to grasp the feather fibres revealing the stalk.

The stalk is then removed with a pair of sharp, straight scissors. Mark’s demonstration, as you would imagine, was based around CDC, using a number of feathers at once to gel the required density and colour, but to add variation he would sandwich a Coq de Leon feather between two CDC feathers for an amazing effect.

Occasionally he would place some dubbing onto the clamp before setting the feather into place, to gel a dubbed effect at the base of a CDC hackle. The combinations already seem endless. 1 was soon turning out some great dry flies

On getting your hackle prepared, the next task is to form a loop to spin the CDC in. This can be achieved by forming a loop with the thread in the conventional way, or more effectively by splitting the silk with a dubbing needle, Marc has developed a cunning spring loaded clip to stop the loop unravelling before you respin the silk with the CDC in place.

You could even use a loop of copper wire for wet flies.

Then run your thumbnail from the top of the bobbin to the bottom of the loop. This will tighten the twists a little more, and now you are ready to wind your hackle or CDC rope.

During Marks demonstration of his Magic Tool he was placing the body dubbing and hackle all in the loop at the same time, assume for more ease and speed.

You do need good quality CDC and long feather fibres to gel the most out of the tool, so goose CDC or Cul de Cygne will give you the best results.

From copying the dries Marc had tied, I moved on to nymphs and wets as CDC , gives great movement underwater. It is a far tougher feather than most anglers realise, but if you think about it, water fowl are continually preening themselves and getting the oil from the preen gland so the feathers have to be quite tough.

This makes for some very durable flies that will last far longer than flies lied with feathers from normal capes. The only problem that I can immediately see is that the flies will not readily sink. This can easily be overcome by using a sinking line, weighting the fly with lead or using a heavy wire hook.

CDC bas been on the scene for a fait while now. It is exciting that new techniques are releasing the potential of this very versatile material.

Basics Of The Magic Tool

I have harped on for long enough! Let’s get tying. While playing with the Magic Tool I have found that standard thread will net split easily.

It is best to use Petijean’s specialist thread for this.

If you are net a fan of splitting silk, this process can be achieved with a turbo spinner just as easily. Instead of splitting the thread, from a loop and insert the spinner.

It’s quite simple really, just offer the clamped CDC to the loop in the came way that you would dubbing.

Secure it and you are good to spin. In this form it primarily lends itself to dry flies, others in time.

Marc made a point of trimming the base of each of his dry flies so they floated the right way up, I would suggest that you do the same. This afterthought also reveals the barb, therefore minimising the chance of you missing a fish. When yen have gained confidence with this method, try adding other feathers to the melting pot. Bronze Mallard looks amazing, mixed with CDC in this fashion. Try it and others anything is possible.

Looking through the drawers of materials surrounding my fly dressing bench, I spot some great colour CDC feathers sent to me by Karl Humphries of Dearnford Trout Fishery, with the thought of tying salmon flies with CDC. I have used marabou to great affect in the past and CDC promises to be even better as it doesn’t stick together in the same way as marabou and promises to give greater movement.

I placed a double hook in the vice and wound touching turns of thread down the book shank, and then tied in three strands of crystal flash as a tail. Inspiration came from looking at the waste from the CDC. I stripped two of the orange quills to make feelers.

I decided to go the whole hog and added two eyes before splitting the thread to take the prepared yellow CDC. The tricky part was the body; with each wrap of the CDC rope you make, sweep the last wrap out of the way.

So far so good, the fly is really taking shape. I finished it off with a whip finish, and trimmed the fly to shape. For a really good effect leave the CDC fibres under the body to look like feelers.