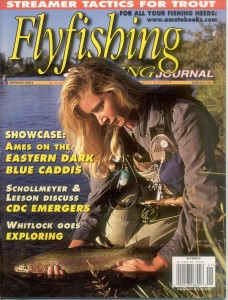 To the charge of being fly pattern junkies, we plead « guilty with extenuating circumstances » The creative energy in fly tying today is nothing short of phenomenal, and the promise of good fishing embodied in all the new designs, new uses of materials, and new ideas proves irresistible, year after year. So we begin each new season outfitted with dozens of new fly patterns some of our own design, many from other anglers or front fly shops to sec how effective they are, whether they represent actual improvements, if it’s worth tying up more. One mildly tragic consequence is that we typically take to the water in vests bursting with more fly patterns than would be seemly to enumerate in polite company.

But as poet William Blake writes (in, appropriately, Proverbs of Hell), « The road of excess leads to the palace of wisdom. » For one of our aims is ultimately to reduce the clutter. Along with every other fly angler on the planet, we are looking partly for those elusive all purpose patterns, the double or triple duty flies that can be fished effectively in a variety of different hatches, thereby reducing the number of patterns that it’s necessary to carry. The CDC A.P. Emerger fills the bill. We think that emergers are a particularly fertile territory for multi purpose fly designs. Unlike the nymphal, pupal or adult forms of the various aquatic insect groups, each of which prescripts a distinct silhouette or image to the trout, the emergent forms of mayflies, caddis, and midges probably look more alike to the trout than different a rumpled confusion of crumpled wings, splayed legs, and scattered light diffused through the translucence of a crinkled half empty shuck. The characteristic profiles of both the aquatic and adult forms of the insect are momentarily obscured in the brief interval of emergence, and in this transitional phase, insects that may look quite different from one another nearly all their lives become, for a short time, rather similar in appearance.

This, at least, is the theory, predicated on an assumption that neither one of us would care to argue very far that is, the appearance of an insect registers in the came way on both the angler and the trout. It is, of course, entirely possible that fish and fisherman may look at the very same thing, but see something completely different. The truth of the matter will probably never be uncovered; so all you really have to go on is the evidence of your own experience.

The basic idea for the CDC A.P Emerger comes from Swiss tier Marc Petitjean, an innovative fly dresser and one of the world’s reigning authorities on the history and use of CDC. For tying emergers, CDC is one of those slam dunk materials CDC flies float well, but flush against the surface; the supple, frond like barbules trap tiny air bubbles that scatter light and at the same time provide a lifelike mobility to a fly. The emerger pattern shown here is easy and relatively fast to tic, uses a minimum of materials, and has a workmanlike range of uses. A pretty fair number of hatches can be covered simply by carrying a light and a dark version of the design-say, a tan bodied style and another with a medium or dark gray body in a couple of sizes each. Anglers who routinely encounter a specific hatch BWOs, for example, or black midges can tic versions to meet more exacting color requirements. But a small selection of light and dark flies can take you surprisingly far while minimizing your vest inventory. This pattern can be fished floating in the film, just subsurface, or deeper as a dropper behind a weighted fly.

The key to the pattern is a CDC dubbing loop. A conventional dubbing loop technique is illustrated in the tying steps. The sidebar shows the use of a new tool designed by Marc Petitjean that makes tying CDC (and other materials as well) faster, easier, and neater.