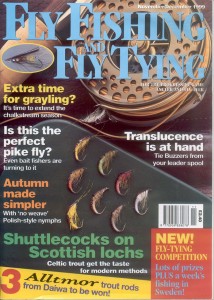 When your fishing vest comes delivered with a « how to wear your fishing vest » instructional video, you’ve just got to take it seriously. When the same fishing vest arrives sans video, you become both insecure (« am I wearing it right ? ») and curious (« what the hell did they find here to make a video about ? »).

The fishing vest (or waistcoat) is a particularly interesting concept. Once despised and poked fun at, now virtually every flyfisher I meet is wearing one. I’m not entirely sure whether it is the rugged practicality of the thing or whether it’s this group fashion mentality. Maybe it’s a bit of both.

Still I am a confirmed non-vest man: give me a bum-bag or a fannypack and I’ll go off and fish quite happily. So, should I really be reviewing the MP vest ? You bet.

I first came across the MP vest at a show in Europe three years ago, and I was very impressed. This is the most thought out, best concept applied, grade A fishing waistcoat on the market. Head and shoulders above the rest, this vest oozes class.

On the whole, I make a habit of avoiding unnecessary compliments so it must be good. Designed by Monsieur Marc Petitjean (who you may know for his famed cdc’s, or his Swiss hair-styling, either way there’s a video in it somewhere) and manufactured to a very high standard (no loose threads).

I’ve known women who were into rubber. I’ve heard of obsessions with velcro. M. Petitjean has a fetish for zips.

The MP concept is one of the ultimate in versatility. Unlimited pockets, unlimited zips.

The vest clips and zips into place.

The frame itself is quite smart and has one hidden double entry pocket at the front. It can be either slung over the head (poncho style) or zipped on over the shoulder. The front can clip to the back using adjustable straps, alternatively the straps can be housed in a zip-on attachment, and the entire vest becomes free to be rotated around the neck, an ingenious method of allowing access to the back pocket(s).

The large back pocket module is probably very useful for things like lunch. It can be subdivided into two by means of an internal zip, which interestingly only goes about half way down, and closes by means of a two-way zip. A nice feature of this module is that it zips on to the vest top and bottom allowing a raincoat or a fleece to be fed in-between.

The vest comes with three smaller cargo pocket modules, which can be zipped on to each other (top or bottom) and on to the vest in various different strategic positions. Inside the pockets you will discover not one, not two, but three zips ! allowing you to sub?divide as desired. The modules will take two standard Wheatley flyboxes, just.

Both these modules have drainage holes, which is just as well because although each module has its own flap to keep out the worst of the weather, rain will get in.

There is great attention to detail. As well as having a (hopefully) unique fetish for zips M. Petitjean also is a perfectionist. Both these modules have an internal stitched loop for lanyard attachment and a velcroed mesh pocket at the rear for I have no idea what, but hey, I’m not a waistcoat guy, other fellows may well think of 50 uses for this feature.

There is also a tool pocket for your forceps/pliers/scissors tool. This pocket closes by velcro only, because – let’s face it – one doesn’t want to overdo things on the zip front. Inside is a lanyard attachment loop. This pocket zips and velcroes to the right shoulder and, interestingly, has no drainage hole. Immediately I thought « oversight, ha ! » and similar thoughts, but of course forceps would half slip though drainage holes (unless you put them in upside-down, I suppose) providing you with something far more annoying than wet pockets. I have a German girlfriend, and she’s organised too. Meticulous attention to detail can be quite endearing, but on the whole it’s just bloody annoying.

The final module is the tippet and small accessories pack. It consists of three small velcro-closing pockets, each containing a tab with two holes for lanyard attachment and (conceivably) poking tippet through. In addition, there’s a pin-on heavy duty foam fly patch which can be attached to the front of the pockets. And, of course, this module zips either directly to the vest or to any of the other modules.

Apart from versatility I like the idea that I could, for example, store stillwater flyboxes in one module, river boxes in another, sea-trout kit in another and so on. And so long as I take the correct one, it’s a wonderful system.

Continuing down the same theme, the vest comes in three distinct colours (tan, olive and navy) and individual modules are also available, so it is possible to use a colour scheme to organise your life.

A system like this will not come cheap. There is an immense amount of work involved in the manufacture, just sewing in all those zips… However, I don’t have a problem with the £80 price tag. It’s a quality item.

And it probably deserves the video too.