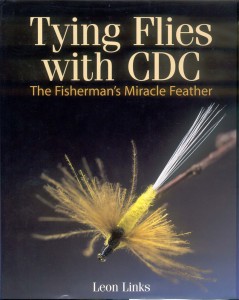 Publishing a book on CDC has always been a dream to me. Now this has turned into a reality, with the help of numerous people to whom I owe many thanks:

Marjan Fratnik for being my best friend and guide in many aspects, for his encouragement and for sharing his immense knowledge of flies and feathers;

Marc Pet]tjean for writing the preface and for being such a wonderful host, for giving support and sharing his knowledge of flies and feathers;

Henk Baan for his enthusiasm, good ideas and patience while reading and commenting on my texts;

Karen and Merlin Unwin for believing in the project, for their advice and support during the writing process;

Tony Deacon for editing my script;

John Roberts for his help and encouragement, and for writing the foreword;

Ina and Hans van Klinken for their friendship over the years, for their inspiration, their flies and for introducing and guiding me in the land of small, lousy mosquitoes and large grayling;

Rudy van Duijnhoven for his pictures and indispensable help while shooting the pictures of tying instructions and fly plates;

Paolo Jaia for his flies and putting me in touch with tiers in Italy;

Elie Beerten for his flies and putting me in touch with tiers in England;

Nicolas Ragonneau for his flies and putting me in touch with the French tiers;

Tetsumi Himeno for introducing me to the Japanese tiers

And to many others who have also contributed to this book with their ideas, flies and pictures. Alas they cannot all feature in these pages but they have been important nevertheless and I thank them for their help and kindness.

When I designed my first CDC dry fly patterns, I never expected that this fabulous material was to conquer the entire planet a few decades later! The real potential of CDC as a flytying material only became apparent to me during my flyfishing experiments on the river.

In the 1980s very few anglers could accept the idea that nymphs, streamers and salmon flies could consist of 100% CDC. I well remember an article published in the fishing press at that time in which I was roundly blamed for having created a series of nymphs and streamers made exclusively out of Cul de Canard feathers! CDC was, of course, pre eminently a material for dry flies.

It took many years before the Swiss tradition of using CDC in all manner of ways came to be recognised and copied.

CDC has certainly risen to fame today but it is, paradoxically, still not very well understood, since the majority of flydressers only use a limited number of tying techniques.

I believe that in the years to come we will see numerous further developments due to the plasticity of tying materials especially of a versatile material like CDC and this offers an infinite number of possibilities to the tyer.

It is not a coincidence that CDC has seduced the entire flyfishing world!

Leon Links has produced the first international and comprehensive book on the subject. It is both historical (tracing the early days of CDC) as well as practical (full of tips for flytyers and with a considerable number of step by step sequences).

This is a remarkable reference book, the product of a great deal of hard work done with patience and passion.

Bravo Leon and thanks!

Probably more than anyone else, Marc Petitjean has been responsible for the huge popularity that CDC flies have today. He has developed a considerable collection of CDC fly patterns and made commercially available the feathers and tools needed to tie them. His products are distinguished by their quality and the originality of thought that Marc has brought to flytying.

Marc Petitjean was born in 1955 in Troyes, France. At fourteen, he started experimenting with his grandfather’s split cane rod and an old line that needed frequent greasing to stay afloat. In 1978, Marc went to work in Fribourg, Switzerland. With the region’s numerous fine rivers, it was here that flyfishing really took hold of him, learning from anglers of the calibre of Louis Limouzin and Michel Roggo. During this time, he became interested in CDC flies, inspired by Gerhard Laible’s unorthodox tying techniques published in Der Fliegenfischer. But it was not until 1986 that Marc started working seriously on his own CDC designs.

By the late 1980s, Marc had devised a complete series of CDC flies and was considering turning professional tyer, who quickly recognised that there was something special about Petitjean’s flies. Veya helped Marc in every possible way, even supplying him with a considerable quantity of CDC feathers. In April 1990, Marc gave his first presentation at a show at Hilden, near Düsseldorf, organised by Der Fliegenfischer magazine. In May of the same year, he attended the Fly Fair, in the Netherlands. On both occasions he encountered tremendous enthusiasm for his flies and techniques.

Over the years, tyers have tried to copy his patterns with more or (usually) less success. His technique of tying split-wing duns, for instance, has been particularly puzzling. By “anatomising”, people could detect the tying process, but not the details. While tying a fly for me during an interview, he pointed at the wings of a nearly finished dun. With a smile he said: “Some people are pretty frustrated, because they don’t know what these wings look like before they are cut. They can only see what is left! “He went on tying and explained that it wasn’t just a matter of understanding but, more importantly, of practice. Even after fully understanding the processes involved, it would take most tyers several dozen attempts before they could turn out a proper MP. To demonstrate his point, Marc showed me how to pick fibres from a CDC feather, then told me to try and do the same. It proved much harder than it had looked when he did it and I ended up ruining a precious CDC feather. MPs don’t just look pretty, they are imitative and effective. In The Complete Fly-fisher’s Handbook (1998), Malcolm Greenhalgh wrote: “If you can only afford a few, it is worth keeping them for particularly selective or difficult trout or grayling that have refused more conventional flies. An appropriate CDC pattern will often take these fastidious fish”.

Marc’s first series of flies, from 1989, can be considered that basis of the MP collection. The most striking feature is that all sixteen flies are composed almost entirely of CDC. Whole CDC feathers are used for the bodies, while the wings are made of bunches of CDC fibres. Only the tails of some of the flies are tied with cock hackle fibres. All of these flies look quite simple: superfluous elements are left out. MPs are devised to imitate natural insects and there is an MP design for almost any hatch one is likely to encounter. Marc Petitjean is adamant on one point: “…the most important features of a dry fly are size and silhouette. Colour is more important to the fisherman that to the fish, since, most of the time, the fish sees the fly in silhouette against the light.”

MP’s bodies rest on the surface film, while the hook bend is under the surface. This gives them good balance and tends to keep them sitting upright. Moreover, it confers better hooking than with high riding, traditionally hackled flies, especially with grayling. MP’s are also better imitations than traditional flies because emerging insects spend more time in the water film, rather than riding high on the surface.

There has been some discussion about the imitative correctness of Marc’s split wing duns. Many people believe that an ephemerid fly either has its wings upright and closed together (dun stage), or spread out on the water (spent stage). Few realise that, immediately after emergence from the nymph, ephemerids hold their wings slightly apart in order for them to dry and harden off properly. It is at this vulnerable stage that the insects are particularly attractive to the fish. MP’s split wing duns were designed to imitate this stage.

MP’s Series 1 also contains some caddis (sedge) patterns. MP 52 matches the many dark caddis species, such as occur frequently in Scandinavia. These are very effective for evening and night fishing. MP 53 imitates the lighter species, such as the Brown Sedge and Caperer.

These MPs are tied like the caddies flies, but they are smaller and can be considered as general patterns. They are tied in different colours to represent all of those little beasts that are so hard to identify on occasions: e.g. micro caddis, smuts, black gnats, etc.

MP 71 imitates an ant, hawthorn fly, or even a black beetle. MP 72 has a yellow body with black rings and can be used to suggest wasps, bees, hover flies, etc.

In 1992, Petitjean devised a second series of flies, with some interesting innovations. He astonished the fly-fishing world by his introduction of subsurface CDC patterns! Before this happened, CDC had been used only for tying floating flies.

Since nymphs are presented in the same element as the fish, the quarry can scrutinise them far more closely. For nymphs, therefore, colour, shape and anatomical details need to be more accurately rendered than in a dry fly. MP’s nymph tails contain bunches of speckled Coq de Leon fibres on either side of the hook. The abdomen is conical, while mobile CDC fibres are used to imitate the legs.

In his second series, Marc devised these representations addressed specifically at emerging ephemerids. On occasions, fish become preoccupied with this stage of the insect’s development as they struggle helplessly in the surface film. In these patterns, wing cases are formed by folding forward a bunch of CDC, which traps air very effectively. This provides buoyancy for the front of the fly, while the hook bend and rear part of the body sinks below the surface. The hook bend is weighted with silver wire, which also gives it an attractive extra sparkle. There are four colour variations.

This Caddis pupa imitation looks most convincing with its ribbed but shaggy body, its opening wing buds (represented by two feathers folded forward) and CDC fibres sticking out to suggest the legs.

This pattern is a spent fly, coming in two colours : red and dark brown.

In recent years Marc Petitjean has gone on to devise many more patterns, imitating midges, stoneflies, beetles, ants, grasshoppers, water boatmen, tadpoles and other creatures. His entire collection is now quite extensive. It has been necessary for me to try and make a representative selection of what I consider to be his most generally useful dry flies, emergers, nymphs and streamers. Inevitably, I have had to leave out many patterns from this remarkable innovator. It is due largely to Marc Petitjean that CDC flies have become so widely known and generally popular throughout the fly-fishing world.