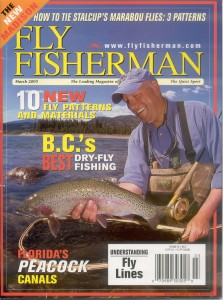 Traditionally, streamer move along a horizontal plane with little motion except for the occasional vertical jig from stripping fine. Marc Petitjean says he was unhappy with this straight, unrealistic movement and bas worked for the last seven years to create something that gives a fly life but isn’t hard to, cast. The result is the Magic Head, a soft plastic cone that when tied to the front of a streamer makes it swim with a side to side motion like a real baitfish. Folded back over itself, the Magic Head substitutes for an epoxy head, and it allows you to fish the fly in a traditional manner without the side to side motion. Unlike lips made of epoxy, the heads don’t cause the fly to dive when retrieved. To tic the Magic Head on the front of a hook, wrap a base layer of thread behind the hook eye. Slide the sleeve of the Magic Head over the eye until it sits on the base layer of thread and the hook eye is unobstructed.

Secure the Magic Head with several open, loose wraps of thread. Applying too much thread pressure before securing the head with a base layer can cut the material. Once the sleeve is covered, begin applying thread pressure. Heavy¬ wire hook eyes like on a Tiemco 600SP are too large for the Magic Head to slide over. For these types of hooks, slide the head over the hook point and up to the eye like you would a bead on a nymph pattern. Magic Heads also fit on tube flies.

To attach the fly to your leader fold the head backward, tic a knot, and fold the head forward. The head weighs almost nothing se, you won’t need to modify your cast, the soft plastic won’t damage your rod should they collide, and the edges of the head don’t reduce a hook’s gap space.

Lefty Kreh was one of the first to see Petitjean’s Magic Heads in action at the AFFTA retailer show in September 2004 and says, « This is one of the most innovative and interesting fly tying materials that I’ve seen in a long time. I see a number of possibilities for using this with streamers in both salt and fresh water. »

Magic Heads come in packs of six in three sizes and two shapes, round and oval, through Hareline Dubbin for $4.95. Round heads are suited for flies with dumbbell eyes or flat profiles like Clouser Minnows. The oval head works better with thin, wide profile flies like Deceivers. According to Petitjean, lie is also developing Magic Heads with prismatic eyes. For more information visit www.hareline.com  or call (877) 448-9966.